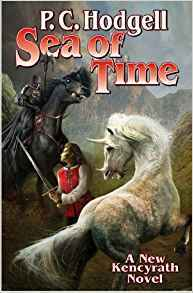 I’ve been reading one of the Kencyrath books, The Sea of Time. If you haven’t heard of them, go read God Stalk right now (or whenever’s convenient, I’m not picky). I found a copy at a college library book sale and read the chapter titles. I was sold when I saw a chapter called, “The Untempling of the Gods”.

I think the first book is the best of the series, but the issues I have with the later books are easy to forgive. P.C. Hodgell was in the middle of working on her college thesis when she wrote them, so they understandable suffered a little. They weren’t as polished as God Stalk but I still enjoyed them a lot. If you like Fafhrd and the Gray Mouser, the thieve’s guild action in the first book will keep you endlessly entertained.

The protagonist is a Highborn Kencyr named Jame (short for Jamethiel Priest’s Bane). She initially suffers from Zelazny-esque “Mythic Hero Amnesia”, though its handled well. She’s a member of a race that isn’t native to the world. They’ve fought a millennia-long, losing war with the god of evil, are obsessed with honor, and practice monotheism even though they despise their god.

She is a compelling, well written, and three-dimensional female heroine in the S&S genre. Such seems rare, even if we include generic fantasy literature as well. Most of the attention goes to Conan and his iron-thewed ilk. When prominent female characters do show up they tend to be two-dimensional (both ivory-skinned and voluptuous) rather than people in their own right. Now that isn’t to say that all S&S does this. Teres from the Kane novel Bloodstone was a fierce warrior with a well developed personality that went beyond being a sexual object for the male characters to lust over. Jirel of Joiry got some cosmic adventuring in, though if I remember right there was a lot of mention of “heaving bosoms” and such. I’m sure there are others, but the fact remains that they are a rarity in the field.

Even the cover art for Honor’s Paradox and Bound in Blood depict Jame as a big breasted woman wearing revealing clothing. This is despite the fact that it is something of a plot point that she is small breasted and often mistaken for a boy (much to her annoyance).

I suppose what I’m saying is that it’s refreshing to read a S&S book that escapes from the R. Howard camp in this regard.

It occurs that I haven’t said anything about The Sea of Time despite it being the title of this post. Well, too late now. Go read the series and I’ll post more later.